The transition of eight microfinance institutions (MFIs) to small finance banks has opened a new source of loans for their customers and potential worries on their repayment capacity.

This is because Reserve Bank of India (RBI) prohibits micro lenders from lending to customers who already have borrowed from two MFIs. However, with some of these MFIs becoming small finance banks, the same customers could tap other MFIs for loans.

According to RBI guidelines issued in July 2015, more than two MFIs cannot give loan to the same borrower at the same time and the total loan amount from the two MFIs should not exceed Rs60,000 in the first cycle and Rs1 lakh in subsequent cycles. Seven microfinance institutions are in the process of changing into small finance banks, and Equitas Small Finance Bank has already started operations.

According to data available with the Microfinance Institutions Network (MFIN) for the first quarter, the eight micro finance companies that will become small finance banks by March 2017 account for 40.50%, or 14.5 million, of the 35.8 million customers of MFIs.

“We are trying to fix a cap for total loans for MFI borrowers, because consumer is the same and even the client repaying capacity is the same. There should be a common norm for all, irrespective of who is the regulator and the constitution of the lender,” said Govind Singh, managing director of Utkarsh Micro Finance Ltd, a small finance bank licence holder.

“Currently, we also consider loan taken by our joint liability group (JLG) borrowers from banks, though the central bank doesn’t state anything related to MFI borrower taking loan from a bank,” he added.

JLG borrowers have the option to finance loan either through banks, MFIs, non-banking financial companies

“Average ticket size of microfinance loans in West Bengal increased to Rs29,000 at September end from Rs20,000 as on March 2015, capturing a 45% growth, while other top four states like Maharashtra, Uttar Pradesh, Tamil Nadu and Karnataka managed a 20% growth in the same period,” according to Kalpana Pandey, managing director and chief executive officer of CRIF High Mark Credit Information Services, a credit bureau. 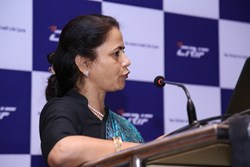 “Once Bandhan became a bank, it was technically outside MFIs’ ambit. Microfinance borrowers who had taken loan from Bandhan were automatically eligible to take additional MFIs loan. All financial institutions, including banks, need to see that borrowers have capacity to service the loan,” said P. Satish, executive director of Sa-Dhan, the second self regulatory body for the micro finance sector.

Out of 42 million JLG borrowers as on September end, 14% have taken loan from more than two lenders, according to data compiled by CRIF High Mark.

“In some cases, third lender can be MFIs also because when loan is just closed and the institution has not uploaded data (or not renewed loan), many MFIs make use of this interim period of two to three days to give another loan. It is certainly a risky situation since you are giving more loan than what can be managed. These issues crop in because everyone is not adhering to the same rule,” Satish added.

Banks hold one-fourth of total gross loan portfolio of Rs92,000 crore for JLG as of September 2016, according to data compiled by CRIF High Mark.

Banks give loans to JLG borrowers either through their own channel or through business correspondent arrangement through MFIs. Since MFIs can work as business correspondents for the banks, banks mainly use this channel to meet their priority sector lending norms. Largely, lenders to micro finance borrowers follow the norm of not giving more than loan of Rs60,000 in total .

“We look at overall indebtedness of Rs60,000 and the number of loans linked to micro finance. Though we are not strict about Rs60,000 if borrower has enough capability but we are certainly not going up to Rs1 lakh…given borrower has not more than two loans plus myself,” said a banker, requesting anonymity.